Inspiration...when you least expect it

I wasn't looking for a new story idea.

A friend invited my kids and me to a gallery exhibit called "Kate Clark: Mysterious Presence" at Newcomb Art Museum of Tulane after school. (My friend's an artist; she does stuff like take her kids to galleries after school.) My kids were into it, and it was free, so off we went.

Three life-size antelopes greeted us head-on...and they had human heads.


Artist Kate Clark uses traditional taxidermy techniques to create animal sculptures. Then she sculpts a face from a human model, attaches that to the animal bodies, and uses the animal's skin to make the creature look real. It's disconcerting at first, but also weirdly lovely. She humanizes the animals, and animalizes the humans, by creating these magical chimeras. 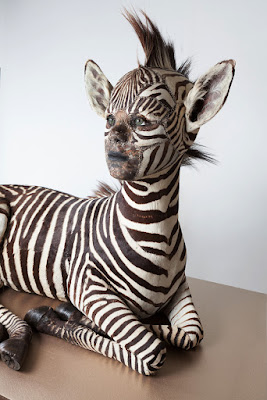 "She Gets What She Wants"

As I walked among the sculptures, I noticed each face was different, which got me to thinking about their personalities. What would they say? How would they interact with one another? Where do they live? What if someone found the place in the deep forest where these creatures lived?

I felt like the story was already written, and I just needed to remember it, or find it. Then I realized, no, I need to write it.

Now I'm haunted by these magical creatures and what they want to say to me. I'm not ready for their stories just yet--I still have a bunch of others to work on--but then again, who am I to turn away anyone who wants their stories told?
Posted by Ginny at 11:09 AM