I did something bad last night. 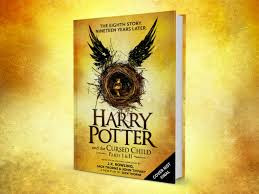 I stayed up really late to finish Harry Potter and the Cursed Child. Yeah, as vices go, reading until the wee hours is probably not so bad. Occupational hazard.

Anyway, here's my more-or-less professional take on this latest installment in the Potterverse.


Over the summer, I finished rereading all seven Harry Potter books and had the excellent seventh one fresh in my mind when I picked up Cursed Child. Although the newest book is an enjoyable read and a welcome dip back into the Potterverse, it stumbles more often than the novels.

First of all, yes, it’s a script, written in dialogue with stage instructions. This has some advantages: Plot moves quickly and characters are developed through speech and action. Disadvantages include the lack of inner dialog and outer description you get when watching a play or reading a novel.

Cursed Child is written well, and is a familiar world and cast, so the disadvantages are minor. When someone says Hogwarts Great Hall, we immediately have a mental image. We can even picture Harry, Hermione, and Ron as 40-year-old adults. Without some of that inner dialogue, however, the Big Lessons can sound overly melodramatic:

Draco: I never realized, though, that by hiding him away from this gossiping, judgmental world, I ensured that my son would emerge shrouded in worse suspicion than I ever endured.
Harry: Love blinds. We have both tried to give our sons, not what they needed, but what we needed. We’ve been so busy trying to rewrite our own pasts, we’ve blighted their present.

The story begins exactly like the final chapter of Book 7, on the platform to board the Hogwarts Express. Harry and Ginny are married with three children, James, Albus, and Lily. Hermione and Ron have daughter Rose. Albus is nervous about his first trip to Hogwarts; he’s worried about being sorted into Slytherin. Harry reminds him that many good people come from Slytherin, including one of Albus Severus’s namesakes, a bit of foreshadowing.

On the train, cousins Rose and Albus meet Scorpius Malfoy, the son of Draco. Rose turns up her nose and leaves, the first indication that Albus and Scorpius will be challenged as the sons of infamous fathers.

Time speeds up in a montage of scenes of the boys becoming close friends and school pariahs. Albus and Scorpius are well-rounded, dynamic characters expressed through great dialogue:

Scorpius: Look, I am as excited as you are to be a rebel for the first time in my life—yay—train roof—fun—but now—oh.
Albus: The water will be an extremely useful backup if our Cushioning Charm doesn’t work.

By the time they turn 14, Scorpius and Albus decide to commit a heroic act, but end up endangering the entire wizarding world. Time travel rehashes some of Prisoner of Azkaban and Goblet of Fire, which feels a little like cheating. At the same time, the revisits are cleverly done (three versions of adult Hermione and Ron are particularly fun) and make excellent points about the dangers of reliving the past, while also giving opportunities to achieve closure with beloved characters.

Another pervasive theme is the relationship between fathers and sons. The difficult relationship between Harry and Albus propels much of the story’s action and emotional drama, with parallels between Draco and Scorpius and Harry and his father-substitute Dumbledore. Each yearns for the approval of the other while finding his own footing, a theme as old as writing.

Family beyond fathers and sons is less important here than in other Potter books. Hermione, Ginny, and new character Delphi are the most well-developed female characters, but they reinforce the primariness of the father-son dynamic. Albus’s older brother and younger sister are oddly absent from the bulk of the book. Thinking of the close-knit Weasley family, it feels strange that Harry and Ginny’s other kids are such afterthoughts, especially in situations that affect the whole family. Then again, stage production may limit how many characters can crowd into the story.

To be honest, these blips are pretty minor, and almost welcome (there is some writerly fallibility, even in the Potterverse!). The overall story, with its twists and turns, offers surprises while revisiting older themes in fresh ways.

It’s fascinating to me that Rowling has built an entire world that exists beyond one writer’s creation. Cursed Child is a welcome journey into that world, filled with so many of the things we look for in a Harry Potter book: action, love, and the battle of good vs. evil—without as well as within.

You need to have time to take care of the kids active. Please visit our website and play exciting flash games.
Thanks you for sharing!
Games2Girls
Kizi 1000
Frin
Friv 3