Yep. When someone told Emma Goldman "it did not behoove an agitator to dance," she responded:

"I want freedom, the right to self-expression, everybody's right to beautiful, radiant things." 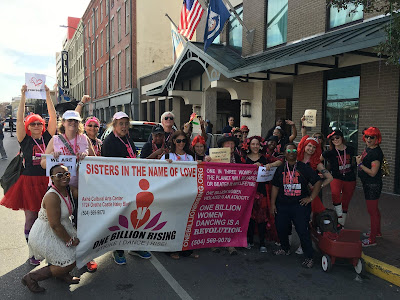 In that spirit, on Sunday I participated in a One Billion Rising Revolution march organized by Ashe Cultural Arts Center--part of a Mardi Gras parade.


The Mystic Krewe of Femme Fatale hosted our group of about 30 beautiful, diverse women, men, and kids singing, dancing, and high-fiving the crowds in solidarity against the exploitation of women.

My spouse and kids participated to show that men and boys also need to support an end to violence and exploitation--and the creation of a positive new paradigm in which all people stand together in love, support, and awesomeness.

I first danced in support of One Billion Rising a few years ago, when I was a member of the Pussyfooters, one of New Orleans' oldest adult female dancing groups.

Then, as now, I was heartened and uplifted by the overwhelmingly positive support of parade goers, from women pumping their fists and shouting "You go, girls!" to men applauding "the work y'all do" to boys and girls cheering and waving.

This is how those of us committed to the continuation of diversity, positivity, and mutual support will #keepmarching and encourage others to march, too. It's not about being against something (other than the incredibly obvious abuse and exploitation of women)--but being FOR a vision of the world we are creating, one revolutionary dance at a time. 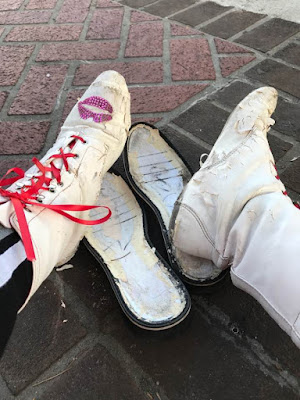 I literally danced my boots off--the soles fell off about halfway through the parade route--#NeverthelessShePersisted!
Posted by Ginny at 1:27 PM