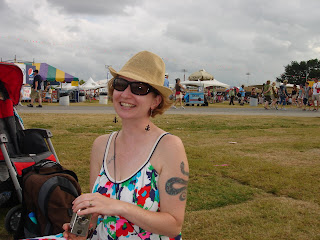 Last weekend, and the weekend before, was the 40th anniversary of Jazz Fest (officially called the New Orleans Jazz and Heritage Festival). It's seven days (over two weekends) of music, food, crafts, and celebration of all things New Orleans (and even tangentially related to New Orleans--I mean, Bon Jovi was one of the headliners this year!). We were lucky enough to fall into three free tickets, plus tickets from Mom-in-law for Hubby's bday, so we got to see Emmylou Harris, Gal Halliday and the Honkytonk Review, Silky Sol (an R&B singer who was just hilarious), and overheard lots of others as we strolled past all the different stages. We ate and drank ourselves into oblivion, and I bought a new hat (as you can see above!).

We went on Thursday, known as "locals day," because nobody seems to know it's open--and so it's not crowded at all. No lines for food or potties, the porta-potties still have toilet paper, and you can actually get close to the stages to see (or find space further back to spread out without being stomped). Perfect!