Book Review: The Hate U Give

Believe the hype. This book is as good as everybody says it is.

From its elegant front cover to its subtly devastating back cover (of a barely visible, faceless, brown-skinned young man) this book had me riveted. 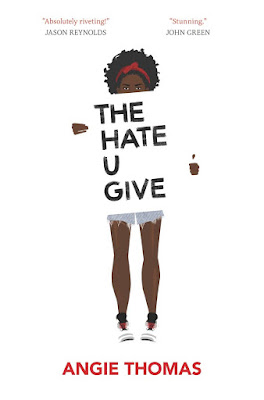 Sixteen-year-old Starr attends a party she shouldn't (her parents would freak) with a friend she barely knows anymore. Although Starr's family lives in a working-class black neighborhood, Starr lost touch with her old friends once she started private school in a mostly white neighborhood 45 minutes away. Now she's interacting with people who only remember her as Big Mav's daughter and think she thinks she's "all that."

Shots ring out, and her oldest friend (and former crush) Khalil whisks her to his car, offering to take her home. Their sweet reunion is cut short when the car is pulled over on a deserted street for a broken taillight. In a grueling scene, Khalil is shot to death by the cop, with Starr as the only witness.

In the following days, Starr works through her shock and grief with the loving support of her family and Khalil's. Starr is terrified to let anyone know that she was the person riding with Khalil; she wants to be treated normally, not like a freak. But when she returns to school, her classmates--including her white best friend--have a totally different response to the news that a "suspected drug dealer" and "gangbanger" has been killed. So careful about her cultural code-switching, Starr's silence begins to eat her up inside.

As Khalil's death moves from personal to public, Starr realizes her testimony might change the narrative. It might also get her killed; a violent gang leader warns against snitches. She gains courage from her community: her family, true friends, police officer uncle, and activist lawyer encourage her to do what she feels is best.

Although heartbreaking events drive the plot, Thomas's well-rounded characters engage with humor, love, and empathy. For example, Starr's obsession with the proper care and maintenance of "vintage" '90s sneakers: "No lie, every time a sneaker is cleaned improperly, a kitten dies." Starr and her boyfriend Chris share inside jokes about "Fresh Prince of Bel-Air" and love of '90s hip-hop (including his charmingly awkward public rap to win her back). Her dad teases her with his theory that Hogwarts houses are secretly gangs: "with their own colors, their own hideouts, and they are always riding for each other. ... 'Just 'cause they was in England don' t mean they wasn't gangbanging.'"

I loved these characters, their love for one another, and their desire to protect their community. As Starr says, "People like us in situations like this become hashtags, but they rarely get justice. I think we all wait for that one time, though, that one time, when it ends right."

Angie Thomas has humanized the people behind the hashtags, bringing readers inside the minds and hearts of people caught in impossible situations. Her book encourages empathy and compassion while demanding justice. A powerful, beautiful, uplifting book.